Will Children Outgrow Their Gait Problems? 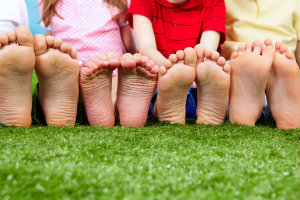 Kids go into and out of phases on a regular basis. One day it feels like they love That One Animated Movie with That One Song You Will Never Escape Hearing, then the next they’re dressing in black and listening to something that makes the movie not seem so terrible anymore. When it comes to gait problems, you naturally hope they grow out of them sooner than later. But will they?

The good news is that, in a majority of cases, conditions such as in-toeing, out-toeing, and toe walking will resolve on their own as a child develops and adapts to normal walking. It is common to see these abnormalities up to the age of 3 before improvements begin to be seen, and some conditions may take longer to resolve than others. Flatfoot, for example, may last until 5 years of age or so.

As a general rule of thumb, a gait abnormality should be examined by a professional if it is still visible after the age of 3. There is certainly no harm in taking a child in earlier, however, as it gives us a foundation to measure his or her progress over time. This way, if things appear to be stagnating or growing worse, action can be taken sooner rather than later. It should also go without saying that any condition that is causing consistent pain should also be seen as soon as possible.

by Dr. Sanjay V. Patel [email protected]
Connect with me
Dr. Patel has over 20 years of experience in the field of podiatric medicine and podiatric surgery.
Comments are closed.